Private support enabled Lara Rabinowitz ’22 to study on campus and abroad during her time at NC State, all while combining seemingly different majors in seamless ways.

If Lara Rabinowitz ’22 ever had any doubts about how her majors could be blended together, studying abroad removed them.

The newly minted NC State alumna was a rising sophomore when she visited Cyprus in 2019 to explore how her fashion and textile design degree could be paired with her anthropology degree. The trip involved archaeological digs, lectures and more, all of which proved that the two disciplines weren’t so dissimilar after all.

“I think there’s a really interesting intersection between textiles and anthropology, especially when it comes to archaeology and finding artifacts,” Rabinowitz said. “I’m curious about how textiles are found, because they don’t preserve very well, so this was a cool opportunity to learn about archaeological textiles even though that wasn’t the main focus of the trip.”

NC State’s Global Engagement Awards Fund made it possible for Rabinowitz to travel to the island nation and participate in the research, which, thankfully, took place before COVID-19 stepped onto the world stage and disrupted international travel. Still, she managed to take part in several other study-abroad opportunities during her time at NC State — trips that helped prepare her for her big move out West following graduation.

Rabinowitz grew up in Chapel Hill, North Carolina, with a deep appreciation for her future degree fields right from the start.

“My favorite subjects were art and history, and I did a lot of crafts with my family,” she said. “My mom actually quilts and does her own art, so textiles have always been a part of my life. I was interested in fashion and dressing up and interior design, too.”

Rabinowitz began giving NC State serious consideration after she participated in a College of Design summer camp and then the Wilson College of Textiles’ Summer Textile Exploration Program, or STEP, during high school. Learning from professors, including some she would later have on campus, made a tremendous impact on her perceptions of the university and showed her that NC State was serious about helping her explore her passions.

Rabinowitz joined the university as a freshman in the Wilson College of Textiles’ fashion and textile design program with a concentration in textile design. She then dual-enrolled in the College of Humanities and Social Sciences’ anthropology program after a cultural anthropology course piqued her interest during her first semester on campus. That class also led to her first study-abroad trip, as the Department of Sociology and Anthropology’s Kathryn Grossman and the Department of History’s Tate Paulette were heading up the Cyprus dig. Rabinowitz was immediately interested in being part of the effort, but first, she had to figure out how to pay her way.

Tying It All Together

Lara applied for the Global Engagement Awards Fund in order to participate in the trip and was quickly accepted. The fund helps members of the Pack afford to study abroad and, thus, become even better prepared to lead in an increasingly international job market upon graduation. And, of course, students have a lot of fun along the way.

“It was awesome,” Rabinowitz said of the trip. “It was a communal living situation where all of the students on the dig would live together, eat together and work together. We would get up at 4 a.m. every day and go out to this site and start digging with our trowels and our shovels. I’m glad I went. I had a great summer.”

Coincidentally, Global Engagement Awards Fund supporter Mohamed Mansour ’68 was the commencement speaker during Lara’s graduation ceremony this spring, helping bring her journey through two majors full circle. Mansour is also a graduate of the Wilson College of Textiles and knows the importance of a global perspective firsthand, having been born and raised in Egypt; educated at NC State and Auburn University; currently living in London, England; and leading several international organizations. His generosity to the Global Engagement Awards Fund enables other members of the Pack to develop that same appreciation for the wider world around them.

“It’s an incredible thing to do, to donate your money to people that you don’t know yet and to support their passions, their goals,” Rabinowitz said. “It’s simply beautiful.”

Mansour’s contribution to Rabinowitz’s education helped spark her interest in studying abroad and led her to later visit the NC State European Center in Prague, participate in several Alternative Service Break (ASB) trips and more. Two of her ASBs were to Hoonah, Alaska, a fairly small island that is home to a fairly large population of Tlingit natives. She attended the weeklong program as a participant one year and then returned later in a leadership role.

“You apply to be a team leader, and then you take a leadership-development class throughout the fall semester and the following spring semester,” Rabinowitz said. “During that class, you plan the upcoming trip and just sort of get ready for it overall. I did that my sophomore year, and then I did it this year, too.

“I’m really drawn to the ASB program because the people are so nice,” she added. “Anyone who wants to spend their spring break doing a service trip is a friendly person, so I’m very glad for the community that I’ve become part of there.”

Studying abroad also helped Rabinowitz focus on what she would produce for her senior showcase — no small decision considering her wide range of interests and talents. The Cyprus trip gave her a new appreciation for historical artifacts and culture, which led her to take an archaeological theory course, which in turn introduced her to the theory of object agency, the idea that objects have the power to impact our emotions and actions.

The result: a senior showcase featuring items from Rabinowitz’s life that have transcended mere form and function to become iconic pieces of her life.

Rabinowitz’s time at NC State may have come to an end, but the knowledge she gained while studying here and abroad will serve her well in her next stage of life. The young alumna is moving to Boulder, Colorado, for a special internship this summer with window-covering company Hunter Douglas. As part of her duties with its textiles division, she will examine how window blinds can be better designed for both aesthetic appeal and performance.

Whatever she ends up doing for a job after the internship, and however she ultimately weaves her majors together, Rabinowitz credits private support with helping her afford to attend NC State and continue her lifelong interests.

“There are millions of amazing things to give your money to in this world, so I think it’s probably hard to choose, but I think education is a great choice because you have a very personal impact on people,” Rabinowitz said. “It gives people the opportunities — the freedom — to follow their passions, to not worry about the financial side of things and just focus on your larger goals.”

Click here to learn more about supporting the Global Engagement Awards Fund and other giving opportunities at NC State. 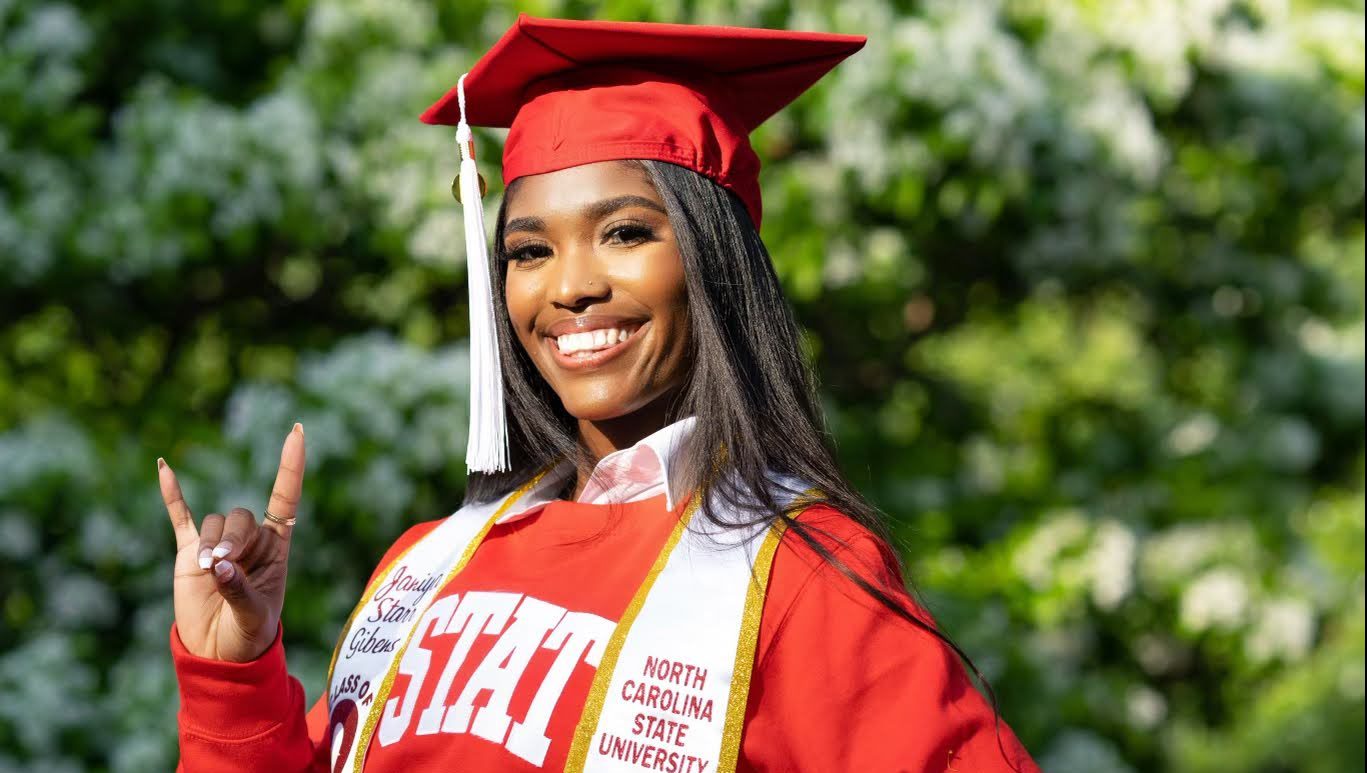 Starr Gibens is an expert at putting thought into action. The first-generation college graduate came to NC State with a list of what she wanted to accomplish, and she has done so much more as a leader, community member, scholarship recipient and advocate for her fellow students.