“Taking it easy” is not a common phrase in Dylan Inman’s vocabulary. To start, Inman applied to 11 schools as a high school senior and got into all of them.

NC State was at the top of the list.

Now the political science and sociology double major is graduating, off to Indianapolis to work for his fraternity, Theta Chi, as a growth specialist. But as an enthusiastic member of the Wolfpack, Inman says his long-term goal is to find a road that leads back to NC State.

“I’ve loved my experience, and I’m very sad to graduate. If I could do it all over, I would pick NC State every time,” he said.

As a first-generation college student, Inman had to rely on himself and trusted guidance counselors to get through the application process.

He was introduced to NC State through the Wilson College of Textiles Summer Textile Exploration Program (STEP). STEP brings rising high school seniors into a weeklong program to learn about the different paths within textiles, while living and learning on campus alongside other students their age.

Although Inman didn’t end up as a textiles student, the impact of STEP ended up being much broader for Inman than providing career direction — he realized that NC State could become a second home.

“I’m from a town about two hours away, so it was much different than being in the Triangle. We got to explore, stay in dorms, eat on campus, meet students and faculty . . . Everyone was so welcoming,” he said.

Through the university’s Spring Connect program, Inman started NC State in January 2019. And he quickly began jumping into a range of activities. His list for this year alone includes University Ambassador, intern in the Office of Annual Giving, Chancellor’s Aide, Theta Chi and the Physical Master Plan Taskforce: Reinforce the Culture and Place of NC State.

“Being involved in so many things allows me to have lots of circles of friends, which has led to different types of support systems,” Inman said. “I always know that there is someone who can help me when I’m stuck or problem solve over a cup of Howling Cow.”

In fact, Inman credits much of his success thus far to simply talking with people and asking for help.

“Never be afraid to ask — even for a position. That’s how I got my internship with Annual Giving. I reached out to Erica Fuller [Assistant Director of Annual Giving for Constituent Programs and Volunteer Fundraising] and showed her what I had done so far and what my goals were,” he said. Fuller and Inman met after he was appointed to the Student Philanthropy Workgroup.

Inman and Annual Giving proved to be a perfect match.

This year during his Annual Giving internship, Inman worked to promote the senior giving campaign and organize the student event on NC State Day of Giving in March. He says that he was excited to show his classmates how philanthropy works at NC State, and encourage them to participate if they are able.

Erica Fuller says that Inman’s high involvement across campus made him the perfect voice and advocate for student giving.

“Even though students aren’t making those million-dollar gifts, their gifts are important because they show the administration and potential donors what we care about and where we should invest fundraising efforts moving forward,” Inman said. “You always hear about these big gifts and it mostly goes over our heads, but I have started to see how impactful they are. I got to hear some incredible stories about scholarships during Red and White Night and I really want to help continue to share these.”

Inman was tasked with looking at what other universities were doing for Day of Giving in the student event space, Fuller said, and helped to shape what the event looked like this year and into the future. His work helped lead to the highest number of student donors during any of NC State’s four giving days.

Annual Giving hosted their Day of Giving event inside the Talley Student Union. Students could participate by posting on social media, playing games to learn more about philanthropy or even making a gift. After they finished two of the three stations, students received NC State swag, but they also had a chance to vote to direct bonus funds. The College of Engineering won.

“It was exciting to see students get engaged about where to vote and how to determine what was important to them. I got a chance to highlight different areas and remind them that the gift can impact someone else,” Inman said. “I give to the Student Emergency Fund because I don’t think other students should worry about money when going to college. But I also support the CHASS Excellence Fund because . . . Well, I’m a CHASS kid.”

It’s not every day that one finds a student enthusiastic about philanthropy. But Inman attributes this interest to his time as a Chancellor’s Aide. That role allowed him to interact with donors and understand their interest in helping students.

Chancellor’s Aides work at events throughout the year, sharing their stories with administrators, donors and other community members. Through the program, Inman met Paula Gentius, the chancellor’s chief of staff and secretary of the university.

“I got to escort her at graduation and then met her a few times at events. Eventually she invited me to sit down with her,” he said. “It was awesome to have free reign to ask questions about who she is, and what she does at such a high-level position. She took an interest in my career and gave me professional advice. It was just a great day and such a meaningful memory.”

Inman witnessed a change on campus throughout the COVID-19 pandemic, with many professors and staff being more vocal about checking in on students and their well-being, and forming stronger connections overall. This increased focus on student success really solidified his relationships.

It’s safe to say that from donors to staff to students, the NC State community made a big impression on Inman. Enough to have him already considering how to return.

“I’d like to come back for a victory lap, maybe through a master’s program or even to be employed here. The staff and high-level administration is so welcoming — staff want us to find success just as much as donors do,” Inman said.

And for next year’s senior class? Inman has a message.

“Don’t procrastinate; do everything you can on the Tradition Keeper medal list on the Brick app,” he said. “And make your senior gift so students coming after you can have opportunities you had, or ones you didn’t have and wish you did. Leave that legacy.”

To learn more about the senior campaign, visit giving.ncsu.edu/how-to-give/annual-giving/senior-campaign/. 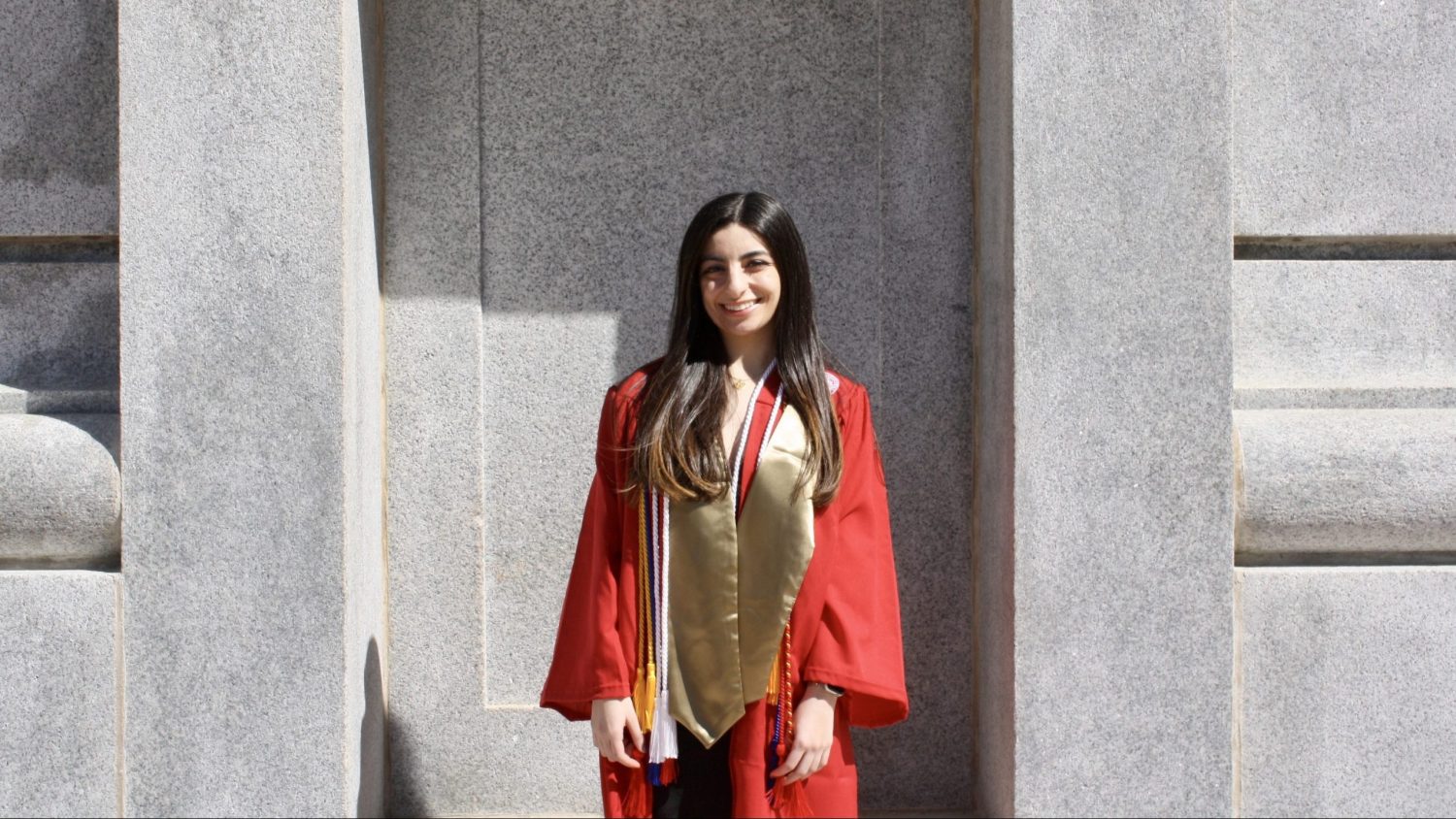 Park Scholar Loujain Al Samara ’22 pursued a broad range of experiences during her four years at NC State, and she graduated with a new understanding of what she has learned, how she has grown and what comes next.

Taking Care of Our Pack

Support the Student Emergency Fund to help our students stay on track to achieve their goals in the face of unexpected financial hurdles.