A Sacred Event in a Shining New Shrine Room

Renovations to the Memorial Belltower made last December’s ROTC gold bar ceremony one of the program’s most memorable.

As Dr. Thomas Stafford handed Samantha Quesenberry the key, he reminded her of an important fact.

“You,” Stafford said, “are the first student to unlock the door to our newly renovated Memorial Belltower. No one else in the history of NC State will ever be able to say that.”

NC State Air Force ROTC Cadets Jason Brown and Andrew Merrill watched as Quesenberry, part of the Air Force ROTC program’s Space Force component, opened the door to the most sacred structure on campus. The sun had all but set on the evening of Dec. 2, 2020, making the light shining from the Shrine Room’s new fixtures even more impressive.

Brown and Quesenberry took turns placing the gold bars for their uniforms below the recently restored memorial plaque, which displays the names of NC State alumni who died while serving in World War I. New LED lighting shone from the edges of the plaque, illuminating the names and giving a thoughtful glow to the whole Shrine Room. Cadets graduating from the Air Force ROTC program do this the night before their commissioning ceremony in order to symbolically connect with the university, the Memorial Belltower and all members of the Pack who have served in the U.S. armed forces over the years.

Cadet Merrill retrieved the gold bars early the next morning and transported them to the commissioning ceremony, held at noon in the Court of North Carolina. The bars were pinned to Quesenberry’s and Brown’s uniforms by their family members during the event and signify their new military rank: second lieutenant.

“The commissioning ceremony is the legal event that grants the cadets a ‘commission’ in the U.S. Air Force or Space Force,” Lt. Col. Joe Dumont, commander of NC State’s Air Force ROTC program, said. “The commission is granted from the President of the United States. Then, the second lieutenants just wait to go on active duty.”

The ceremony looked a little different than those held in the past, with the audience of friends, family members and others seated six feet apart on the Court of North Carolina. The weather was warm for December and the sun was shining, though, enabling the event to go off without a hitch.

“We took as many precautions as we could and even sanitized before and after any of the handshakes we did during the ceremony,” Lt. Col. Dumont said.

“Commissioning was the culmination of four and a half years of hard work, as well as hundreds of early mornings and late nights,” Brown said. “It’s something I have been looking forward to for a long time, and to finally be able to raise my hand and take the oath to become a second lieutenant was incredible. I cannot wait to see where the Air Force takes me!”

For 16 years, NC State graduates have had the opportunity to place their class rings in the Memorial Belltower the night before their graduation ceremony. Stafford, now the retired Vice Chancellor for Student Affairs, has overseen each of these events. While speaking on the importance of the Shrine Room and its memorial plaque during one presentation, Stafford noticed a young man — an Air Force ROTC cadet — staring thoughtfully at the names inscribed there.

“When he got inside the Shrine Room and he looked at the plaque, he told me he was just overcome with emotion,” Stafford said. “Then he said, ‘I had an idea: They let us put our rings in to spend the night. Why can’t we let the students, the cadets who are going to be commissioned in the Air Force, Army, Navy or Marine Corps, put their gold bars in?’”

The two pitched the idea to the Air Force ROTC, and in 2016, the gold bar ceremony began taking place before each spring and fall graduation.

“When they’re commissioned, I am invited to come to the ceremony and tell the cadets what happened in the Shrine Room when the gold bars spent the night,” Stafford said, adding with a smile, “It’s some hokey stuff that I made up about ‘the spirit of the Wolfpack Warriors.’”

Stafford said he owes Charles Dickens for the idea, as the spirit of the Wolfpack Warriors legend bears a striking resemblance to the plot of A Christmas Carol. The spirits of Wolfpack Past, Present and Future reportedly take turns visiting the gold bars during the night, enduing them with Wolfpack history and tradition.

“They also connect them with all the Wolfpack alumni who have gone before,” Stafford said.

What’s in a Name?

So, who were those Wolfpack alumni who account for the “Memorial” part of the Memorial Belltower?

The names of 34 alumni who died while serving in World War I (and one who didn’t) are inscribed on the Shrine Room plaque. James Henry Baugham, Gaston Lewis Dortch, David Swain Grant and their fellow servicemen each gave the last full measure of devotion in defense of their country, and it was their memory that spurred the Belltower’s creators and early donors to undertake the building project.

Now, more than a century after those members of the Pack passed away, renovations to the Memorial Belltower are helping us remember them in an even better way. Among the many changes and updates to this iconic structure are new, real bells in the belfry, an expanded plaza area, a redesigned Shrine Room and a restored plaque.

“I was fortunate to be able to take one of Dr. Stafford’s Belltower tours before the renovations started, so being able to see how the Shrine Room has changed and improved was really incredible,” Brown said. “This is one of my favorite traditions that I was able to participate in while at NC State — being able to honor those NC State students and alumni that gave the ultimate sacrifice in World War I.”

As Quesenberry and Brown begin their military careers, they can draw inspiration from the names their gold bars rested under during that night when the spirit of the Wolfpack Warriors visited them.

“AFROTC, and the U.S. Air Force, has three core values that are instilled [in cadets and airmen/airwomen] from the first day they join: Integrity First, Service Before Self and Excellence in All We Do,” Lt. Col. Dumont said. “The cadets are constantly tested on these values and learn that they are easier said than done when faced with tough choices. I couldn’t be prouder of our commissioning lieutenants. They have all proven the Core Values are instilled deep in them.” 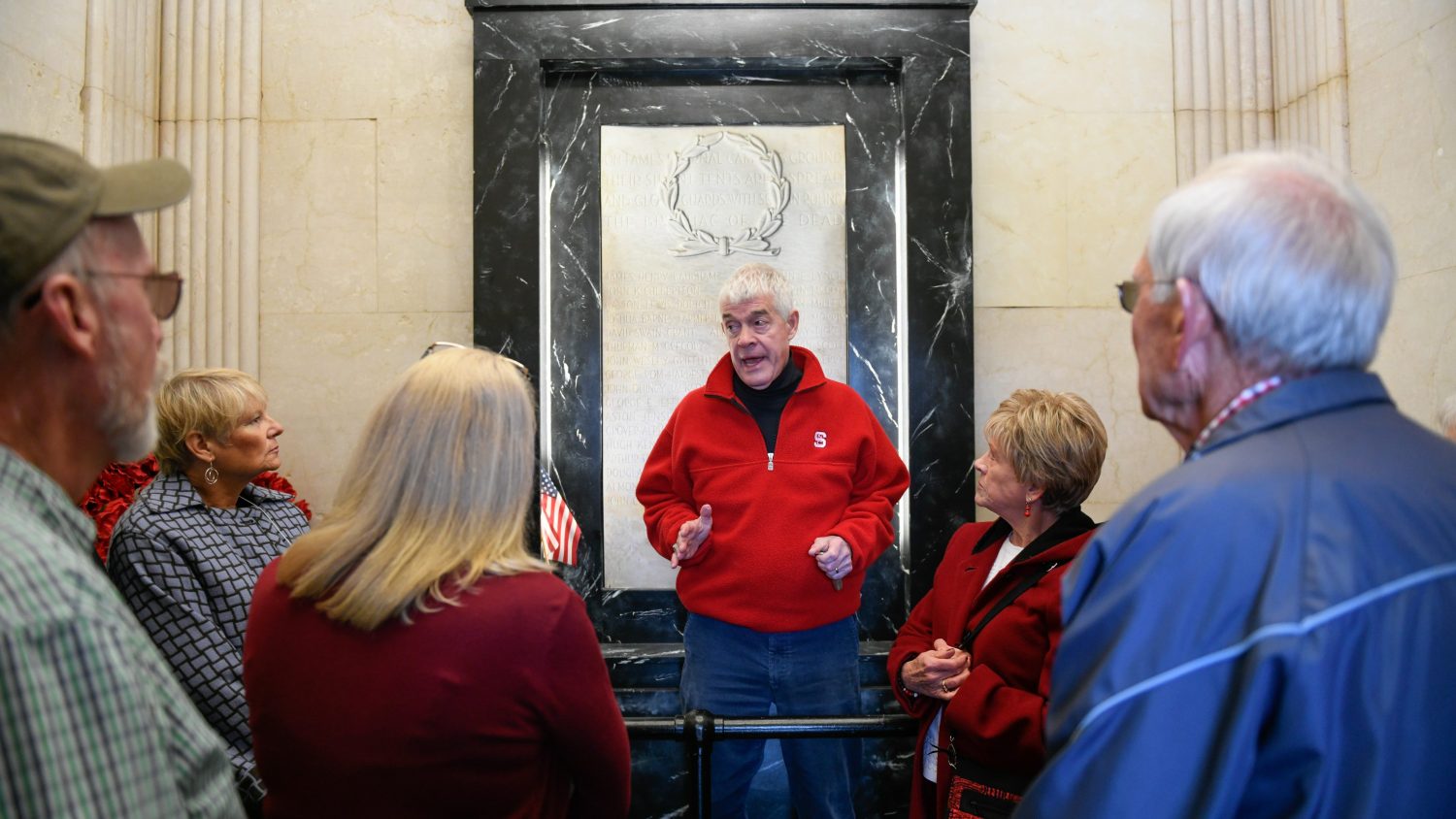 Sharing a Key to NC State’s Past

Whether telling surprising stories while leading tours of the Memorial Belltower or unlocking its door for surprise photos, retired vice chancellor Tom Stafford serves as a keeper of the flame of Wolfpack spirit.